For many years steam turbines was the only propulsion system available for LNG ships, even though its efficiency was considerably lower than diesel engines. The main advantage was the simplicity of utilising the boil-off gas in the steam boilers to produce steam for the steam turbines. However, with the introduction of the reliquefaction plant and gas-driven diesel engines, it is today possible to install high-efficiency diesel engines as prime movers, and thereby significantly cut fuel costs.

The MEGI diesel engine applies the principle of non-premixed combustion (the Diesel principle).  The dual-fuel two-stroke engine is based on the combustion principle of operating on Heavy Fuel Oil (HFO) or Marine Diesel Oil (MDO) together with high-pressure natural gas, where the fuel is injected and burned directly as opposed to the premixed or Otto-cycle combustion.

In brief, two or three gas fuel valves inject high-pressure natural gas to the combustion chamber and to ensure an optimally controlled combustion, a small amount of pilot oil is injected simultaneous with the natural gas via two or three conventional fuel oil injectors.

The MEGI engine is equipped with additional safety systems that ensure a safe operation on gas without requiring rupture discs in the scavenge air receiver, the exhaust gas receiver, and in the exhaust gas piping.

Owners and operators are provided with maximum fuel flexibility and, depending on the relative price and availability of gas and fuel oil, are free to choose the most competitive fuel as the engine operates with the same efficiency on both gas and fuel. The Diesel-cycle ensures stable gas combustion under all weather conditions, such as heavy weather and high ambient temperatures, without any risk of misfiring or knocking.

All qualities of LNG can be burned with the same high efficiency, and the engine has no specific requirement to the methane number. The dual fuel engine can operate on natural gas in the load range from 10% to 100% load. Furthermore, depending on the fuel availability on board, the engine can combust any ratio of natural gas and HFO/MDO. The MEGI engine is ignited on diesel, and changeover to gas operation can take place at 10% engine load. Both HFO and MDO can be used as pilot fuel. 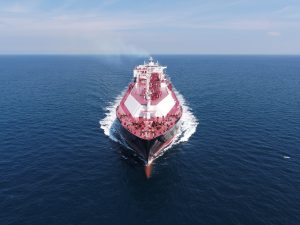 Another advantage of gas-fuelled tonnage is the ability to adjust operation according to the changing fuel prices and exhaust-emission limits. Service experience shows that the MEGI engine delivers significant reductions in CO2, NOx and SOx emissions.

MEGI vessels generate negligible methane slip during gas operation making it the most environmentally-friendly technology available. The reduction of greenhouse gas emissions, including methane slip, has been found to be 22% lower compared to fuel oil.